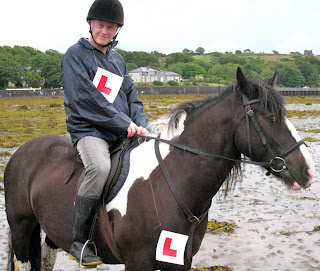 Falling off a horse is easy. The hard bit, I find, is staying on. Anything faster than a trot and we tend to part company. It’s a case of what goes giddy-up must come giddy-down, usually with a backside-bruising bump.
Fortunately, Blaze harbours no ambitions to win the Grand National, so I stayed in the saddle instead of ending up in the sea. That’s what makes her the ideal mount for youngsters and getting-oldsters like me who sign up for a memorable day out with GoTrekking! at the Westport Woods Hotel.
Pony and horse trekking on the beaches of Clew Bay, below, or in the woods and foothills of nearby Croagh Patrick, the sacred mountain so beloved of barefooted pilgrims and blister pad producers, is a thrill, but stick a snorkel down your boot just in case. 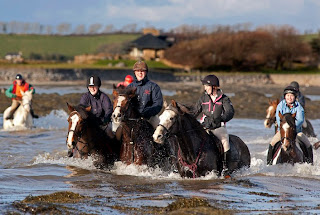 Westport, a worthy three-times winner of the national Tidy Towns competition, is home to Matt Molloy’s pub, Ireland’s busiest and best traditional music venue which is rocked to the rafters seven nights a week by foot-stamping tourists and locals having a great time. One of these evenings the floorboards will give way.
When he’s not off travelling the world, Matt, the flute player with trad legends The Chieftains, picks up his instrument and joins in the fun. Whatever your views on diddly-dee music, there’s nothing more diddly-deelightful than a top-class trad session in a packed Irish pub, especially when it’s Molloy’s, which is on just about every coach tour itinerary.
Westport is a relatively small place, but it punches well above its weight in selling itself as a tourist destination, in large part thanks to the tireless efforts of people such as Westport Woods boss Michael Lennon, musician-publican Matt and other local business leaders.
They have a quality product to promote, and their job is made so much easier by the admirable civic pride of the townspeople who keep the place picture postcard perfect. Litter on the streets is unknown, and the council spends more money on flowers than Elton John, which makes for colourful holiday snaps, below. A visit to Westport is not to be sneezed at. Unless you suffer from hay fever. 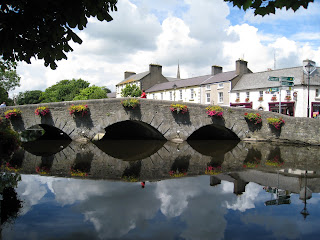 I was sneezing after cycling the 18km stretch of the traffic-free Great Western Greenway between the Mulranny Park Hotel and Newport, but it was nothing to do with the air being full of pollen. Rather, the ditch I rode into after being confronted by two fierce-looking wild mountain goats was full of icy water.
My previous run-in with pointy-horned beasts was 20-odd years ago in Pamplona, where my record for shinning up a drainpipe still stands. It was a memorable trip, on a rickety old bus full of Vietnam veterans and aged hippies who’d retired to Torremolinos and spent their time drinking cheap brandy and smoking free black tobacco cigarettes in Marco’s Mini Bar.
While I survived dangling from a balcony as several tons of ill-humoured fighting bulls thundered past just a couple of feet below, one of the hippies failed to survive the 500-mile journey back to the Costa del Sol. We all thought he’d fallen into a cannabis-induced coma, but he was dead, having suffered a heart attack somewhere along the way. Maybe it’s just as well he didn’t wake up — he’d have been really annoyed about having his face slapped so many times and a litre bottle of fizzy water poured over his head, God forgive us.
The bicycle I dipped in the ditch was supplied by Canadian nice guy Travis Zeray of Clew Bay Bike Hire & Outdoor Adventures, who laughed when I told him about my encounter with the goats. Seemingly, they were more afraid of me than I was of them, but I’d like to see him lying in three feet of freezing water with a pedal sticking in his ribs, expecting at any second to be skewered. 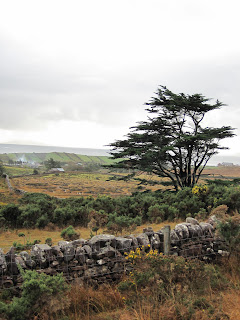 Scary moments aside, and despite being soaked to the skin, riding the Greenway through some of the most spectacular scenery, above, in Ireland with the help of a gale at my back — master of the understatement Travis said it was a gentle tailwind — was a joy. Imagine what it must be like on a warm, sunny summer’s day.
Such a day found me pitting my wits — and some unfortunate big fat worms — against the salmon that have for decades made Mayo’s River Moy a magnet for anglers from all over the world. Although the Ridge Pool in the middle of Ballina is recognised as the hottest spot from which to pull the biggest fish, those that put up the biggest fight are found in the private two-mile stretch of the Moy that runs through the Maloney family’s Mount Falcon Estate just outside town.
This is where famed fashion designer and avid angler John Rocha comes to enjoy a bit of r&r (in his case rod & reel), although I had more luck with my worms, float and Jumping Jack weight at Cunningham’s Pool than he had when I later saw him casting his fly a mile upriver.
Ghillie Robert Gillespie is a master of the art of fly fishing and knows the Moy like the back of his hand. Robert, widely regarded as the best in the business and therefore in big demand, and Mount Falcon boss Shane Maloney were my companions for the day, and I couldn’t have wished for better company. I don’t know which of us was more excited when I hooked my first ever salmon.
I do know that my barman buddy Garrett’s eyes nearly popped out of his head when I walked into Neary’s when I returned to Dublin and presented him with the whopper pictured below. Garrett’s passion is cooking, and that salmon provided him with a week’s worth of delicious meals. Fish is supposed to be good for the brain, but not for Garrett’s, because he forgot to bring me some. Mind you, he did say it was delicious. 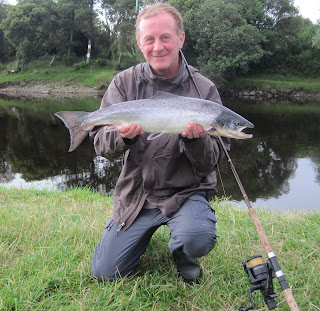 One man who forgets nothing is archaeologist, historian and walking encyclopaedia Jim Henry of Setanta Ireland Tours, who collected me at the Downhill Hotel in Ballina for a tour of north County Mayo. During our day out I learned more about this beautiful part of Ireland than I would have from reading a dozen books.
The cold case cops should give Jim a call because he knows where all the bodies are buried, especially those of the ancient Sweeneys who once ruled the roost in Mayo. Every time we drove past a graveyard he took great delight in telling me it was full of my late clansmen and women. As for Achill Island, which we viewed from Blacksod Point, it should have sunk under the waves years ago with the weight of all the Sweeneys buried there.
The coastguard station at Blacksod, below, played a significant role in the timing of the D-Day landings in 1944. On June 4, meteorologist Ted Sweeney filed a weather report warning of bad conditions which delayed the Allied invasion of France scheduled for the next day. A break came in the weather on June 6, and Operation Overlord proceeded, so hastening the end of World War Two. 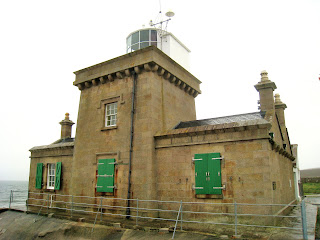 But the highlight of our tour for me was a stop at Mayo’s 6,000-year-old Ceidhe Fields, where you can walk among what remains of the Neolithic dwellings, tombs and dry stone walls that marked out the enclosed farmland. It’s the most extensive Stone Age monument in the world, excavated from the bogland that grows at a rate of one centimetre every 10 years — a bit like what’s left of my hair. Mercifully, Jim made no mention of the 6,000-year-old Sweeneys buried under all that peat.
The glass-topped, pyramid-shaped visitors centre 8kms northwest of Ballycastle is a must-see and has as its centrepiece a 4,300-year-old Scots pine tree, below, which was dug from the bog and is now preserved for all time. A platform on the roof of the clifftop, award-winning centre provides the most awesome panoramic views of the fields and the surrounding countryside, which can be a problem for the staff because as closing time nears visitors are reluctant to leave.
After 10 hours of driving around with Jim I was reluctant to retire for the evening, but he had to be up early next morning to regale a busload of American tourists with more fascinating tales of the flora, fauna, folklore, history — and graveyards — of north County Mayo. They were in for a treat. 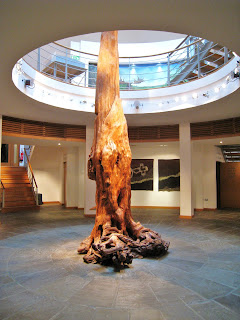 Posted by Tom Sweeney's Travels at 23:44