We were on the coach from Malaga airport heading for our hotel when the rep dropped the bombshell that it was at the top of a steep road known as Heart Attack Hill. There were gasps and groans from the couples with kids and a few unrepeatables from the lads up the back in their Ireland soccer shirts. We’d all packed our flip-flops, but no one had mentioned anything about bringing crampons as well.
It was my first package holiday — curiosity had finally got the better of me — but less than an hour after stepping off the plane I was beginning to suspect it would be my last. As someone who’s always travelled DIY, I didn’t fancy being declared DOA.
But then the cheeky chappy with the microphone grinned and added: “However, a frequent shuttle bus runs to and from the beach and the forecast is for sunshine all week.”
A big cheer went up. We didn’t know whether to kick or kiss him, but he was right on all three counts. The family-friendly Hotel Spa Benalmadena Palace (www.benalmadenapalace.com) is at the top of a steep hill, there is a regular bus to the beach and for seven days the sun shone from dawn to dusk. 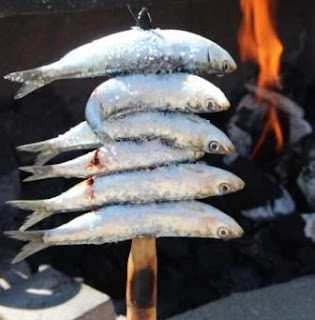 Not only that, on the day we arrived the temperature hit 45C (113F. Only slightly hotter were the six succulent sardines I had for lunch with a side salad, bread and a pint of ice-cold lager for €5.40. Sprinkled with crunchy sea salt and grilled over charcoal, they’d been swimming around minding their own business just a few hours before. That’s what you call fresh fish.
Food and drink in the hundreds of restaurants and bars vying for scores of thousands of visitors’ custom in Benalmadena are great value. In the English-owned Wigan Bar on the broad promenade, for example, a hot roast beef and onion baguette costs €3.45 and a pint of San Miguel lager is a gift at €2. Next door in The Potter, €3.50 buys a generous all-day breakfast that will keep you going until dinner and a pint of Strongbow cider is €3.
Both places advertise an extensive, bordering on baffling choice of dishes and there are children’s menus for €3.25, so a filling meal for a family of four can easily be had for around €20. Far from being lucky finds, such bargains are the norm all along the Costa del Sol. The simple fact is that cheap means busy means profit, so everyone’s a winner. 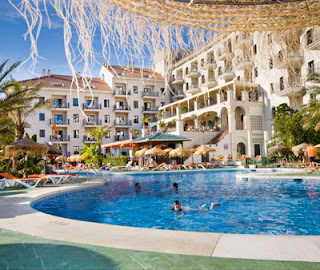 Benalmadena Palace is only 20 minutes by bus from the airport and the same from Fuengirola, where holidaymakers who opt for self-catering can fill the fridge from Dunnes Stores.
The hotel provides nightly entertainment (Welsh singer Laura Elen is brilliant) and has a wealth of facilities including outdoor and indoor pools, paddle tennis, a spa and wellness centre, restaurant and cafe and a huge bar with its own pizzeria. There’s also a small but well-stocked shop run by a charming young woman who does so much sweeping she’d be an asset to any Winter Olympics curling team.
Parents will be glad to know there’s a packed programme of supervised children’s activities that continues into the evening, allowing Mum and Dad to relax knowing their kids are in good hands.
Many of the 182 studios and one-bedroom apartments with sit-out balconies have sea views, but the nearby Benalnatura nudist beach is shielded from sight. Good thing too, as some of the bronzed wrinklies who strut their sagging stuff there look like the Iron Age peat bog bodies on display in Dublin’s National Museum. 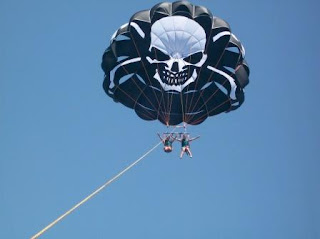 Drag yourself away from the pool or the beach and there’s hours of fun on the water as well as in it, with dolphin-spotting and pirate ship cruises that leave from the marina. For daredevils who want a bird’s eye view of the coast — and an unavoidable peek at the nudists — tandem parasailing is a thrill. If it’s birdies you’re after, the challenging championship course at Torrequebrada Golf Club (www.golftorrequebrada.com) is very close.
Tivoli World amusement park (www.tivoli.es) in Arroyo de la Miel has 40 rides — including a 60-metre Free Fall Tower — and live dance and music shows every day from 5pm to 1am and is one of the highlights of a visit to the Costa del Sol.
In nearby Torremolinos, Gerry Keown from Newry and Karin Buckley from Dublin are celebrating 25 years in business at the Bailey Irish Pub (4 Calle Maria Barrabino, up Calle San Miguel with the sea at your back and across the main street). I first met them in 1985 when they ran the nearby Harp Bar which they’d bought two years before and which quickly became a home from home for Irish holidaymakers.
Torremolinos has changed dramatically in 25 years, spreading out from its old municipal boundaries to become twice as big, but The Bailey, which opened in August 1987, hasn’t changed a bit, apart from the addition of flat-screen TVs. Chatterbox Gerry’s the same kind-hearted host he always was, and Karin — well, Karin’s great. Disturbingly, while I’ve visibly aged, Gerry and Karin — now the proud parents of three fine boys — look as fresh-faced as they always did. Grrrr.
Popular excursions from Benalmadena include millionaires’ playground Puerto Banus for celeb-spotting and window shopping, Gibraltar with its colony of Barbary apes, the mountain town of Ronda whose Moorish and Roman bridges span a spectacularly-deep gorge, and Granada, home to the magnificent Alhambra Palace.
You’ll need your passport to enter Gibraltar (www.discovergibraltar.com), but you might have to wait a while at the frontier while planes take off and land as the access road crosses the airport runway. It’s a little though lofty bit of Britain that juts into the Mediterranean from the southernmost tip of the Iberian peninsula from where on a haze-free day you can look across the strait and see the Atlas Mountains in Morocco. Tangier is 55 kilometres away by ferry and is among the excursion options, but you spend more time getting there and back than you do on Moroccan soil and return to your hotel exhausted, so I can’t recommend it unless you plan on spending a couple of days there.
Gibraltar, which has an area of just seven square kilometres, is home to 30,000 people. That makes it one of the most densely-populated places in the world, which also makes it a madhouse in high summer when the streets and pubs are full of day-trippers, but if you can put up with the crowds it’s a quaint and quirky experience.
The playful baby and juvenile apes are cute, but some of the adults are cranky and can turn nasty. It’s wise to keep bags and handbags zipped shut and held tight because some of these hairy rock dwellers are skilled thieves, so watch your pockets too. 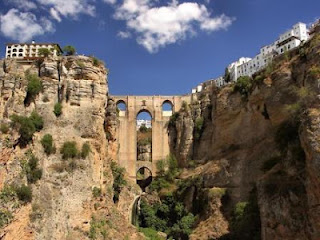 Ronda is the hometown of legendary torero Pedro Romero (1754-1839) who killed 5,558 bulls in a 27-year career. When he retired from the ring at the age of 45 to teach young bullfighters in Seville, it was without so much as a scratch from his exploits. A fine restaurant bearing his name (www.rpedroromero.com) serves the best rabo de toro (oxtail) in Spain and houses a fascinating collection of more than 1,000 photos, posters, capes, swords, suits of lights and other bullfighting memorabilia.
Bohemian-Austrian poet Rainer Maria Rilke (1875-1926), who kept a room in Ronda’s Hotel Reina Victoria, was so blown away by the local scenery that he wrote in 1908: “I have sought everywhere the city of my dreams, and I have finally found it in Ronda. There is nothing that is more startling in Spain than this wild and mountainous city.”
Orson Welles was a frequent visitor to Ronda (a street is named after him), where he stayed at the ranch of his retired bullfighter friend Antonio Ordoñez. In 1987, two years after his death in California and on what would have been his 72nd birthday, the actor-director’s ashes were lowered into a dry well on the ranch. As his daughter Beatrice wept and a priest prayed, Ordoñez threw a handful of sand from the town’s bullring over the urn and then sealed the well, which sits between two oak trees.
Ernest Hemingway, another bullfighting aficionado, Ronda lover and friend of Ordoñez, also has a street named after him. In his 1940 novel For Whom The Bell Tolls, Hemingway, who covered the Spanish Civil War (1936-1939) as a correspondent, writes of a massacre in which republicans murder hundreds of nationalists by throwing them from the top of some cliffs in an Andalucian village. Although he later claimed to have fabricated the incident, it’s widely believed he based it on a 1936 atrocity that occurred at Ronda’s El Tajo gorge. 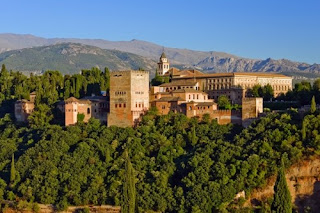 I wasn’t happy with my bill in the Varagua tapas bar close to the Arab Bridge in Granada, so I spoke to the manager, who was taken aback.
“You had a big slice of tortilla and some bread with your beer?” he asked.
“Yes.”
“Then the price is correct.”
This guy must think I’m stupid, I thought, and pointed to the total.
“But look here,” I said. “You’ve only charged me €1.80.”
“That’s right,” said the manager. “The beer is €1.80 and the tortilla and bread are free.”
“Really?”
“Si, señor. In Granada, we are loco.”
In Restaurante Meson Gregorio on the other side of the bridge they’re even more loco — a tapa of meatballs, another of Manchego cheese and a beer cost just €3.20.
I’ve lost count of the number of times I’ve been in Granada, but despite my long absence I should’ve remembered that once you head up into the mountains the prices go down.
One thing I’ll never forget, though, is arriving at the city’s Washington Irving Hotel in 1986 during my first ever visit. I’d reserved a room over the phone and the receptionist had written my name phonetically, so when she spun the register around for me to sign, there I was — Señor Swine.
Traveller, author and US diplomat Irving (1783-1859) wrote The Legend of Sleepy Hollow and Rip Van Winkle, but it’s for his Tales Of The Alhambra that he’s best-known in Spain. The book, first published in 1832 and still selling in big numbers in many languages, is a collection of historical sketches and short fictional stories that paint a picture of daily life in the Alhambra Palace during the Moorish occupation of Spain.
The hilltop Alhambra, built during the mid-14th century and designated a World Heritage Site in 1984, is one of Spain’s premier tourist attractions whose Islamic architecture, intricate arabesque decorations, fountained courtyards and flower-filled gardens leave visitors awestruck. I’ve never in my life seen a more beautiful man-made structure, and I’d urge every holidaymaker heading for the Costa del Sol to chalk it down as a must-see.

I went to Benalmadena during the recent Euro 2012 football finals and spotted the lads from the back of the airport coach moping over their beers after the Ireland-Spain match. But the gloom of that 4-0 defeat didn’t last long — five minutes after the final whistle they were leading a green-shirted conga line in a rousing rendition of “Viva España” followed by “You’ll Never Beat The Spanish”.
With lager at €2 a pint, they certainly had something to sing about.